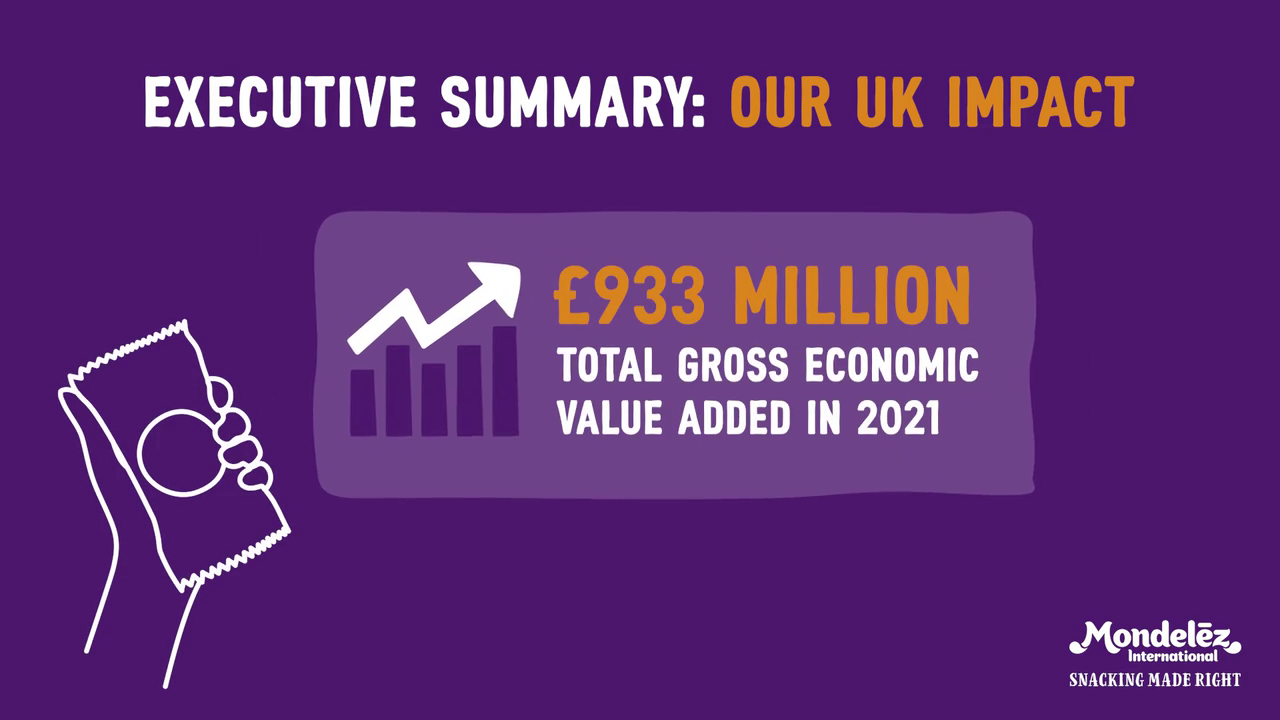 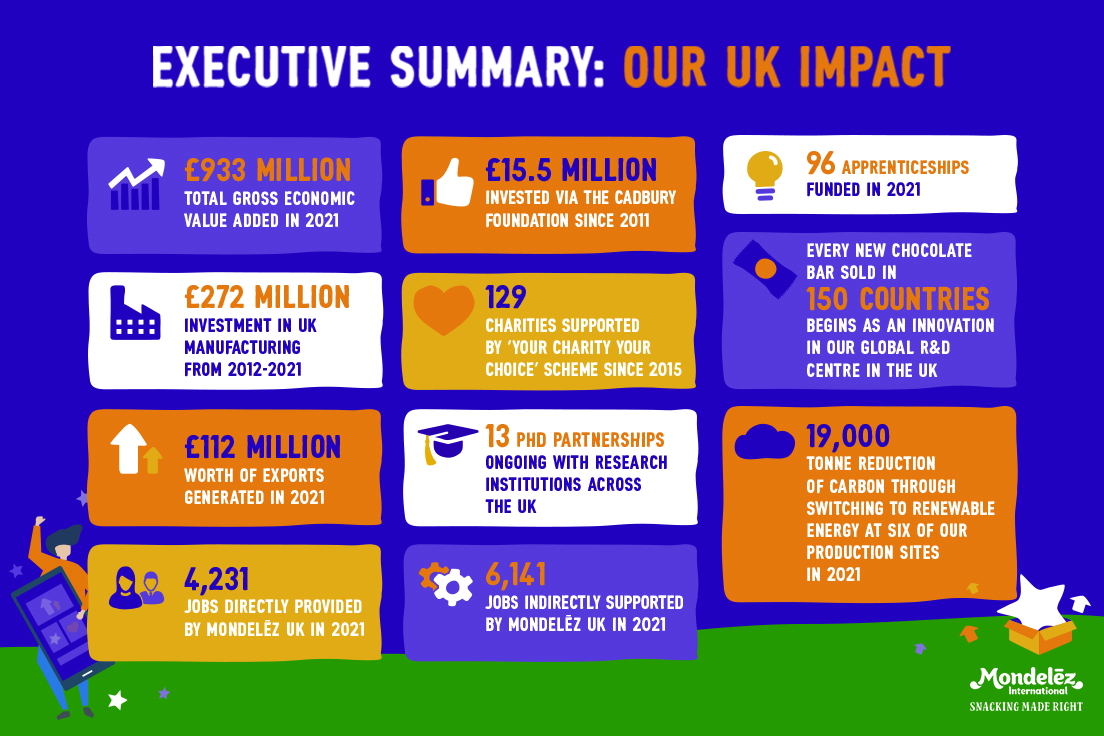 Supporting jobs across the UK

Mondelēz International supports 10,372 jobs across the UK, with 4,231 directly employed and 6,141 indirectly supported. These breakdown as:

Despite not having any sites in the North West of England, the business contributes nearly £86 million and 1,314 indirect jobs to the local economy through supply chain procurement and positive effects on regional income.

From a grocer’s shop in 1824 in Birmingham where Cadbury was founded, to major production facilities located across the UK today, the snacking business is committed to investing significantly into its roots. From 2012 to 2021 it invested £272 million into its five UK manufacturing sites: Bournville in Birmingham, Credition in Devon, Chirk in Wales, Marlbrook in Herefordshire, and Sheffield in Yorkshire.

The Bournville factory has stood for 110 years, and 2021 saw a further commitment of £15 million to upgrade the Dairy Milk tablet production and to expand chocolate making capacity. Cadbury Dairy Milk is the number one chocolate brand in the UK, made in Bournville – the heart and home of the business, which produces 5.5 million blocks of chocolate, 400 million chocolate buttons and 1 million Wispa bars in a single day. In 2014, production costs at Bournville were three times more than those of similar factories in Germany and other European markets. As a result of significant investment in the site, production efficiency has increased by more than 30%.

The business is creating a pipeline of talent for the future, investing in UK apprenticeships and training, running 13 PHD partnerships with research institutions across the country. Since 2017 Mondelēz International has utilized the UK Apprenticeship Levy to create new pathways into the business, this totals an investment of £2.5 million. The business employs more than 600 food scientists, technologists and chemists across its two Research and Development sites in and Reading and Bournville (the company’s Global Centre of Excellence for chocolate R&D), making it one of the largest food R&D groups in the UK.

In 1935 the Cadbury Brothers established The Charitable Brothers Trust with the objective of helping to create prosperous and inclusive communities, today the Trust is known as The Cadbury Foundation. Over the past 10 years The Foundation has spent £15.5 million supporting regional communities, with £7 million used to support those most in need during the pandemic including Age UK, Fareshare, Community Shop, Trussell Trust Foodbanks, Grocery Aid, National Emergencies Trust, national and local charities and frontline NHS and emergency services.

A core pillar to The Cadbury Foundation is health and well-being, in 2021 Mondelēz International’s award-winning Health for Life programme celebrated its 10th anniversary. The scheme has seen an investment of £4.5 million, reaching nearly 250,000 children and adults in Birmingham since 2011 with support to adopt healthier lifestyles through cooking, growing food and physical activity.

The Health for Life programme is delivered by Mondelēz International’s delivery partners, Services For Education and The Conservation Volunteers, who in the last decade have enabled over 200 schools across Birmingham to invest in long-term resources for healthier lifestyle activities benefitting 70,000 pupils and families. In addition, 17 community food growing spaces have been developed with activities involving 6,000 local people whilst more than 1,200 Mondelēz International employees volunteered practical support to enhance the programme.

Louise Stigant, UK Managing Director at Mondelēz International, said: “200 years on we are still motivated by the same values of generosity and duty to nurture the community, evident in the significant impact we have on the economy and communities in the UK as a whole. We have a long, proud history in the UK of adapting to change, enabled by our scale around the world, which has secured enduring success of our business and our beloved brands.”

Andy Street, Mayor of the West Midlands, said: “It’s good to see Mondelēz making this commitment given Cadbury’s Birmingham roots. By investing in Bournville, Mondelēz is creating job opportunities for local people, and I look forward to seeing the next generation of talent benefiting from this apprenticeship programme in the months and years ahead.”